We will explore cultural assimilation in a short story and compare it to the graphic novel by the end of this three day lesson. But first, we read "Home Now."
Lesson Author

Tim Pappageorge
Park Ridge, IL
Grade Level
Ninth grade
Subjects
English / Language Arts
assimilation
Japanese
Japanese Vocabulary
Writing
Reading
Literary Response and Analysis
symbolism (Literary Terms)
Standards
RL.9-10.1
Cite strong and thorough textual evidence to support analysis of what the text says explicitly as well as inferences drawn from the text.
RL.9-10.2
Determine a theme or central idea of a text and analyze in detail its development over the course of the text, including how it emerges and is shaped and refined by specific details; provide an objective summary of the text.
RL.9-10.3
Analyze how complex characters (e.g., those with multiple or conflicting motivations) develop over the course of a text, interact with other characters, and advance the plot or develop the theme.
RL.9-10.4
Determine the meaning of words and phrases as they are used in the text, including figurative and connotative meanings; analyze the cumulative impact of specific word choices on meaning and tone (e.g., how the language evokes a sense of time and place; how it sets a formal or informal tone).
RL.9-10.5
Analyze how an author's choices concerning how to structure a text, order events within it (e.g., parallel plots), and manipulate time (e.g., pacing, flashbacks) create such effects as mystery, tension, or surprise.
RL.9-10.9
Analyze how an author draws on and transforms source material in a specific work (e.g., how Shakespeare treats a theme or topic from Ovid or the Bible or how a later author draws on a play by Shakespeare).
RL.9-10.10
By the end of grade 9, read and comprehend literature, including stories, dramas, and poems, in the grades 9-10 text complexity band proficiently, with scaffolding as needed at the high end of the range. By the end of grade 10, read and comprehend literature, including stories, dramas, and poems, at the high end of the grades 9-10 text complexity band independently and proficiently.

In our reading of American Born Chinese, are are continuing to explore some of the structural choices that the writer has made.  Yesterday, we explored the structural implications that a narrator can have on a given story when we did some creative writing.  We have been reading key scenes from the novel, too, and now we will add to that understanding by reading another key scene from the book in order to glean some thematic insights (RL.9-10.2) as well as an appreciation for some of the structural elements (RL.9-10.5).

In this panel, the anxiety-ridden theme of assimilation (RL.9-10.2) is explored by the author, Gene Yang, as Chink-ee, an embodiment of the worst of Chinese-American stereotypes, stands up on a table in the library at school to do a badly-performed rendition of a you-tube meme that was popular when the book came out originally.  Visually, the scene incorporates many visual structural pieces yielding surprising character insights (RL.9-10.5), including the horrified expression of Danny in the lower left-hand corner: Danny has chosen to change his hair and mannerisms to fit in (assimilate into) mainstream culture at his high school, in part to impress a girl and in part to simply feel ok with himself.

I will ask the students the questions below in order to address this visual quotation: 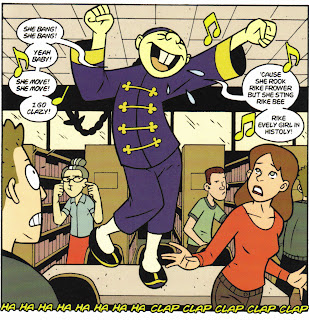 [Note: I am using image frames in my write- up of this lesson as a form of visual quotation.  I do not wish to infringe on the copyrights of the author or publisher by quoting lengthy sequences of images; however, my explanations in this unit will make little sense without these essential visual quotations.]

2) What images play most prominently, and what point of view do they suggest?  Do you feel more sympathetic toward Danny, Chinkee, or the librarian in the back left?

3.) How are images juxtaposed in this scene and to what effect?

4.) Do you think it's important to blend in or maintain your sense of self?  How do you 'code switch' from home to school?  What important adjustments do you make?  What adjustments are you not willing to make?

Across Texts.  You will notice in this unit (and in the previous unit) an attempt to cull together complimentary texts that I hope will add complexity to the students' investigation of the themes of assimilation and identity (RL.9-10.2) and will introduce challenging texts in their own right (RL.9-10.10).  And while the graphic novel of American Born Chinese may seem simple to some students, at least at first, analyzing it more closely creates the opportunity for deep, inferential reading.  It also creates the opportunity to incorporate challenging texts such as "Home Now" by Ryan Oba, a short story that has a very intricate structure and design that creates a strong sense of empathy for the character and realization that he is indeed "homeless" in many of the most important ways (RL9-10.5).  To use a relevant metaphor, the plot of this little gem is almost like a piece of literary origami!

"Home Now."  I will ask the students to read this story aloud in pairs, and I will stop them every 5 minutes ot so to question them on the following plot points.  The literary term I will introduce along the way is "motif," a pattern in the literature that sort of insinuates a theme or character trait.

I found this short story in an anthology, and it's amazing!  Link for Anthology with this story  The gist of the story is that the main character, Robert, experiences the following plot events:

Note on discussion.  I will quickly lead the students to build this plotline on the board by asking them the sort of "what happens next" type of question so that we can put  the following 8 events on the board in order (RL.9-10.2).  I will just begin to address some of the effects of the structural pieces, which are the juxtaposition of the scenes upon each other and use of flashback to have a powerful emotional impact on the reader (RL.9-10.5).  The point isn't to over-analyze this now, but to make sure that the students have tracked with the gist of the story.  As well, we'll begin to broach the topic of the effects of language choice (RL.9-10.4) as they arise in the 8 plot events, but again, not too much heavy lifting just yet.

1.) He gets into a traffic jam and has to hit the offramp (symbolic of his life-in-stalemate).

2.) He recalls the death of his father, his feeling of disconnection, and his mother's present hobby of mindlessly making origami to fill her time.

3.) Robert goes to the Japanese neighborhood (this is in Los Angeles) called "j-town" and is confronted by the elements of motif: a neon sign that says, "If you lived here, you'd be home now"; a homeless man wanting to clean his windshield; and a memory of one time when he felt at home.  These motifs combine (RL.9-10.5) to give him the sense of feeling dissociated from his past, and the story sort of asks if he'd feel more at home in J-town and in the world if he would have retained more of his father's identity as a Japanese man.

4.) Robert attempts to have dinner at a Sushi restaurant but is not served because he is not Japanese enough and does not speak the language.  Even tourists are served where he is not.

6.) Robert is asked for a dollar by the 'bum', a man living homeless on the street, and Robert yells at him.

7.) Robert recalls a gift shop with the smell of the past and a book that his father used to read him about an underwater kingdom (ironically, this is depicted in American Born Chinese).   He feels at home for a minute.

8.) He heads home to an uncertain future feeling a little better about being a bit 'homeless.'

5 minutes
The Benefits of Teaching "Home Now" in this unit

The goal for this first discussion is to firm up the plot and basic character insights (RL.9-10.3), and I will hope that the students have a firm grasp of the 8 plot events in the previous section.  Tomorrow, we will focus on point of view and motifs as structural elements to analyze (RL.9-10.5), and along the way, we will draw connections to the novel, American Born Chinese.

For homework, I will ask the students to re-read the story, making notes and annotations in the text.

Donna Fletcher
Urban
Each Detail Matters: A Long Way Gone
10th Grade ELA » What It Means to be Human