Melissa Romano
Helena, MT
Grade Level
Fourth grade
Subjects
Math
Number Sense and Operations
Fractions
Standards
4.NF.A.2
Compare two fractions with different numerators and different denominators, e.g., by creating common denominators or numerators, or by comparing to a benchmark fraction such as 1/2. Recognize that comparisons are valid only when the two fractions refer to the same whole. Record the results of comparisons with symbols >, =, or <, and justify the conclusions, e.g., by using a visual fraction model.
4.NF.B.3
Understand a fraction a/b with a > 1 as a sum of fractions 1/b.
MP4
Model with mathematics.
MP7
Look for and make use of structure.
MP8
Look for and express regularity in repeated reasoning.

I chose to give my students a division problem for a warm up today. I want to ensure that my students continue to build their problem solving skills and make sense of problems in addition to keeping the skill of division strong. I put this problem on the board.

A movie store had 706 movies that they were putting onto 5 shelves.  If the owner wanted to make sure each shelf had the same amount, how many more movies would she need?

After most students are finished, I ask 2 student volunteers to come to the board and solve the problem or show how they solved the problem. I ask the students to tell the class how he/she knows their answer is correct as well.

In this photo, you can see two students that did the division very differently, but got the same quotient of 141 remainder 1.  These students had different answers for "how many more movies the owner would need." The student on the left thought the remainder was the answer, and the student on the right thought the answer was 4, which is the correct answer.  We were able to have a great discussion about making sense of this problem and really delve into Math Practice 1 by doing so. About 1/5 of my class is still struggling with making sense of problems that have remainders. 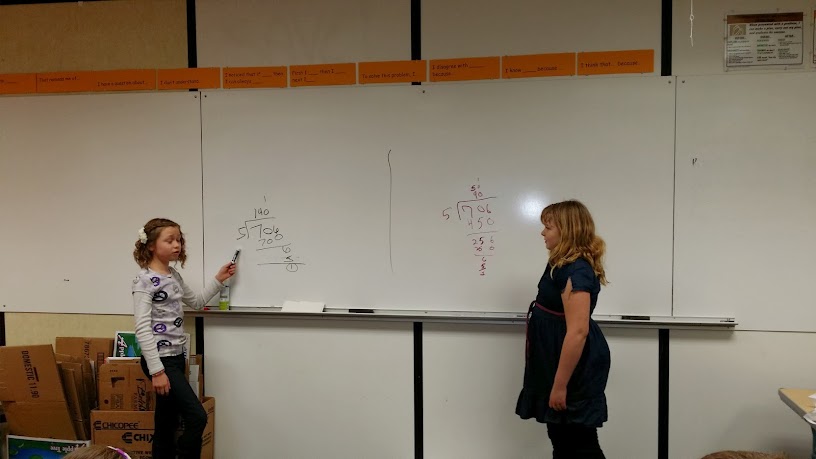 I begin this lesson by playing a few rounds of this brainpop game on the smartboard for all students.  I like this game because it reinforces the concept that fractions are number and have a place on the number line.

After viewing the video, I draw two number lines with end points 0 and 1 on the board for all students to see. I then write these two fractions; 4/9 and 7/11   I model how to draw the two number lines parallel to each other just like in the  learnzillion video. I divide the first number line into 9 equal parts.  I explain to students that while I am just eyeballing the equal parts, it is important to be as precise as I can in order for the number line model to be helpful when comparing numbers using a number line.  Next I divide the second number line into 11 equal parts. I ask students where I would place the 4/9 on the first number line and where to place the 7/11 on the second number line.  I ask a student volunteer to come to the board to write the placement of each fraction. Once each fraction is placed on the number line, I model writing the number sentence 4/9 < 7/11.  Note: One strategy I use in order for students to have equal and equally spaced parts is to encourage students to draw long number lines.  It is easier for students to divide two long strips of paper into 9ths and 11ths and determine the part size equally versus if the number line is short

This is an example of a student's work showing fractions on a number line. Students draw 10 number lines on a piece of paper. I then give them 10 different fraction pairs to compare. Students model the fractions on parallel number lines. As students work, I circulate the room to observe students strategies and thinking.

To conclude this lesson, I lead a discussion about using tools strategically and that number lines are not ALWAYS the best way to compare fractions.  I give students these two fractions to compare; 5/6 and 6/7

Students quickly realize that both fractions are one part away from being one whole.  Many of my students were able to think about the size of the parts and conclude that 6/7 is larger because it's parts are small, therefore the part away from one whole is also smaller than the part in 5/6.

This is still a very difficult concept for my students to think about and one I will continue to talk about often in future lessons.