SWBAT understand that the size of the denominator tells the number of equal parts in one whole. SWBAT compare unit and non-unit fractions.

Students will use greater than and less than symbols to compare fractions with like and unlike denominators.
Lesson Author

Melissa Romano
Helena, MT
Grade Level
Fourth grade
Subjects
Math
Fractions
Number Sense and Operations
Standards
4.NF.A.2
Compare two fractions with different numerators and different denominators, e.g., by creating common denominators or numerators, or by comparing to a benchmark fraction such as 1/2. Recognize that comparisons are valid only when the two fractions refer to the same whole. Record the results of comparisons with symbols >, =, or <, and justify the conclusions, e.g., by using a visual fraction model.
4.NF.B.3
Understand a fraction a/b with a > 1 as a sum of fractions 1/b.
MP3
Construct viable arguments and critique the reasoning of others.
MP4
Model with mathematics.
MP5
Use appropriate tools strategically.

For this number hook, I use the principle that I've used in the previous two number hooks - casting out nines.

I have students write down their favorite two digit number. Next I ask them to do a series of operations to that number. It doesn't really matter what I ask them to do or in what quantities, until I direct everyone to multiply their "new" number by 36.  All students at this point need to multiply their current number by a multiple of 9. I chose 36 in order for students to practice double digit multiplication.

2. Think of the number of people in your family and add that number to your two digit number. (26 + 4 = 30  if there are four people in ones family)

9.  Now if you tell me the number of your single digit, I'll tell you the number your circled.

The student would tell you their single digit was a 1.  I subtract this from 9 to tell them the number they circled was 8.

Students solve number 9  from 3 ÷ 1 (With Remainder)-6.pdf division sheet today. I chose this problem since the remainder should be interpreted to round the quotient to the next highest number so there are enough tables. My students struggled with this on the division assessment, so I want to keep giving them opportunities to solve similar problems.  My students are doing better and making sure they are interpreting the question and remainder of a divisions problem since the assessment a week ago. I want to make sure I keep presenting them with similar problems so they continue to grow their knowledge about division situations.

I give student partners a set of fraction strips manipulative. My fraction strips are plastic which include the fractions halves, thirds, fourths, sixths, eighths, and twelfths.

I give my students three minutes of free play time with these new manipulatives. In my experience, after student have had time to explore the manipulatives they cease to be "toys" and begin to become useful tools in my math curriculum.  I use the timer from www.timeme.com so students are also aware of their time diminishing and can prepare for the transition from "their play time" to "work time."

You can see this student making a design with her fraction strips during the free play time. 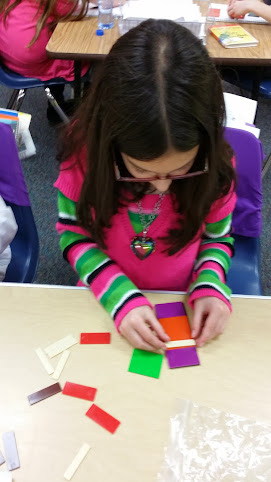 Once the timer goes off, I ask students to place their hands on their shoulders or sit on them in order to help them resist the urge to continue playing with the manipulatives. Then I show this problem on the board.

Students then model this situation with fraction strips, even if they know the answer without them. I want them to become comfortable and familiar with the fraction strips in order to use them as tools with more difficult fraction concepts later.  I lead a brief discussion about how we know Brad got a bigger sandwich. Students start formulating the concept that with the same size sandwich or whole, fourths are bigger pieces than eighths.

Then students model 8 different pairs of fractions that I list on the board.  Students first model the fractions with the same denominator, and then some with the same numerator and different denominators. Students write down each problem on their whiteboards using a greater than and lessor than symbol.

I encourage students to come up with the following rules through my questioning. Through guidance and discussion, as a class we come up with two fraction rules.

Rule #1 - If the numerators of the two fractions that we are comparing are the same, the fraction with the smaller number in the denominator always represents the bigger (greater) fraction.

I write Rule #1 on the board for the students to refer to during the remainder of the lesson. I refer back to the rule through out the lesson.

Rule #2 - If the denominators of the two fractions that we are comparing are the same, the fraction with the larger number in the numerator always represents the bigger (greater) fraction.

I write Rule #2 on the board for the students to refer to during the remainder of the lesson.

After students have modeled comparing fractions with same denominator and then same numerator, I asks a student volunteer to roll three dice. The dice give three fractions. Then, all students order the fractions from least to greatest by writing them on their whiteboards in order using the less than symbol.

When most students are showing their whiteboards, I ask another student volunteer to come to the front of the classroom and arrange the dice under the document camera for all students to see his/her strategy.

You can see in the photo below a student arranging the dice in order under the document camera. 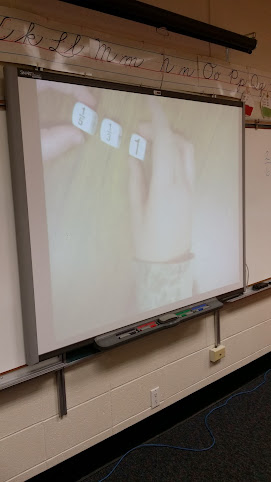 This activity's strength is giving students opportunities to use Math Practice 3 and construct viable arguments or critique the reasoning of others. Students gain familiarity and comfortableness using language about the two rules above in talking about why and how they arrange the dice in a certain way. This activity is also great in pointing out which students are confusing lower denominators as always being the smallest fraction. As in the case above, I could easily scan the room and see which students thought 1/3 was less than 1/5 because three is smaller than five. This is a great challenge when developing students fraction concepts.

My students play this game right up until the bell rings.