SWBAT recognize real world uses of fractions and understand the functions of numerator and denominator.

Melissa Romano
Helena, MT
Grade Level
Fourth grade
Subjects
Math
Number Sense and Operations
Fractions
Standards
4.NF.B.3
Understand a fraction a/b with a > 1 as a sum of fractions 1/b.
4.NF.B.3a
Understand addition and subtraction of fractions as joining and separating parts referring to the same whole.
MP4
Model with mathematics.

Based off of the unit Division assessment I gave last week, I chose to start this lesson with a division problem in order for students to continue to practice applying their division skills to real world situations.

Students solve problem number 1 from the division worksheet - 3 ÷ 1 (With Remainder)-6. After most students are done, (students let me know they are finished by holding their thumb up at their table) I ask a student to explain his or her thinking at the board for all to see and hear.  After hearing a student's solution and thinking, I am able to clear up misinformation or misunderstandings and guide students thinking.

To my surprise, most students did very well on this problem (number one from the worksheet) and understood that the remainder represented the left over pepperoni. This is important to note.  Students were not presented with problems on their previous assessment in which the question used the remainder as an answer. On the division assessment, students had to interpret the remainder and perform another operation in order to reach the desired answer.   This is important for me as I move forward. I need to know which types of problems my students are struggling with the most.  From today's warm up, it does not  appear to be problem types in which the answer is the remainder. I will continue to gather information from my students about this as the days go on.

I begin this lesson by asking students what they already know about fractions. Students participate in a 2 minute quick write.  I set a timer for two minutes and ask students to write as much as they can about fractions in that amount of time. Then, I ask students to describe to the whole class some real-world fraction situations, such as telling time, buying milk or juice in half gallons, naming length in fractions, etc.

fractions are shaded parts of circles

I instruct students to make a list in their math notebooks of things they typically divide into fractional parts, such as food items - pizza, Hershey bars, and apples etc.  Students briefly share their lists by calling out items that were on their lists.  This usually does not take very long because students have a bit of difficult time coming up with anything other than pizza, sandwiches and apples.

In our discussion, I also point out to students that fraction terms can also be used in non-literal ways. For example, when a students says he is 10 1/2 years old, he does not necessarily mean that is is exactly 10 years and 6 months old.  He means that he has passed his tenth birthday, but has not reached his eleventh birthday.  Having students think about this really helps them remember that fractional parts fall between whole numbers, but in math, 10 1/2 does mean exactly halfway between 10 and 11.

Next I give each student six strips of paper. We use this paper to fold equal parts for halves, thirds, fourths, sixths, eighths, and twelfths. While students are folding, I encourage them to share out loud with their table mates and learning partners, strategies for folding and anything they notice about fractional parts as they fold.

This is an example of the fractions strips students folded. 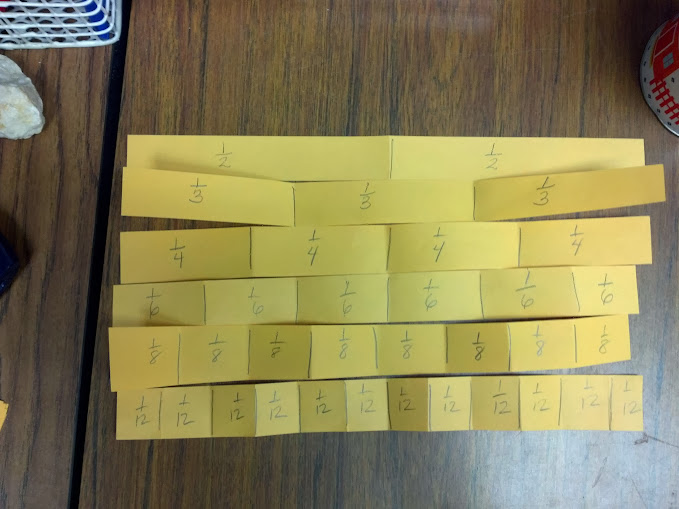 Listen to a student in this video discover how to fold the fraction strip into twelfths.

Fractions strips are beneficial as a model because they help students understand that the denominator tells how many equal parts make up the whole. Students wrestle with the idea about how to fold a strip of paper into eights and twelfths but they begin to realize that those eight equal parts or twelve equal parts tell how many parts make up the whole or determine the denominator.  Fractions strips also help students conceptualize adding fractions. Students begin to understand that 1/8 + 1/8 + 1/8 + 1/8 equals 4/8. They also begin to see that as one half. Operations with fractions can often be a huge challenge for students.  Since a very young age, students have learned that when they add two numbers, the number gets larger.  2 + 2 = 4  When students encounter fractions, they are now presented with numbers to add, but the number (denominator) stays the same.  Buy using visual models, students can explore these relationships without me telling them a "rule" or procedure about adding fractions. They can see the fraction strip and the repeated equal parts equaling one whole.

In fourth grade, one of the Common Core State Standard clusters states that students will build fractions from unit fractions. As in introductory lesson, this activity begins to lay the foundation for students to be successful with that standard.  Fraction strips also lay the groundwork for students to begin thinking about and discovering equivalent fractions. My students very quickly noted that 1/2 = 2/4 = 3/6 = 4/8 = 6/12.

I intend to use the fraction strips again in a later lesson, so students store them in their math notebooks.  I end this lesson by having a brief discussion that leads students to defining the terms numerator and denominator.   I start by holding up a fraction strip to show one part of the eighths.  I ask students how many parts make the whole piece of paper. They very quickly tell me "8."  I tell them that this is the definition of a denominator.  Students write this in the math notebooks as I write it on the board.  I write 1/d where as "d" could represent any number, but that "d" tells how many parts make the whole.

I do the same thing for numerator, except with the eighths fractions strip, I show three parts. I ask students how many parts they can see, or how many pasts are showing and represented.  Students respond with "3." I tell students that the number of equal parts the fraction shows is the numerator.