Yazmin Chavira MTP
,
Grade Level
Seventh grade
Subjects
Math
Expressions (Algebra)
Standards
7.EE.B.4
Use variables to represent quantities in a real-world or mathematical problem, and construct simple equations and inequalities to solve problems by reasoning about the quantities.
MP7
Look for and make use of structure.

After students have been given 30 minutes to complete the unit test we review the do now. I ask students to identify the two methods that are the same on their paper. These methods (A and C) show students how to simplify complex fractions by re-writing the expressions as division sentences (horizontally). Students then divide the fractions by multiplying by the reciprocal. Method B shows students how to simplify the numerator and denominator of a fraction by multiplying both the top and the bottom fractions by the LCD. I ask for student volunteers who feel confident about explaining this particular method to pretend as though we had a new 7th grade student enter the room at the end of class. How would they explain this method to a new student seeing it for the first time? Students who understand and can explain this method are making use of structure to break the complex fraction down into something simple (MP7).

After we review the Do Now, I distribute the Class Notes + Practice. Students are then asked to stand behind their chair. After sitting for 30 minutes to finish the test and doing intense evaluation and communication of a method, they need movement to avoid lagging in motivation to work and think. I instruct students to engage in some yoga stretches (warrior pose and tree pose).

We review how to write products, quotients and exponents using algebraic expressions. This work is from Tokyo Shoseki’s “Mathematics” text, a resource described as the “the most widely used elementary mathematics textbooks currently used in Japan”.

We review writing products with algebraic expressions as statements without the × sign. For example:

Students also complete practice problems with partners after reviewing the skill as a class. What I like about these problems is the focus on representing real situation with algebraic expressions. I also like the use of models to visualize the operations and relationships between variable and constants. For example, one of the first few problems states:

In order to buy 2 items that cost a yen each, a 1000 yen bill is paid. The amount of change can be represented as:

The line models drawn for this example is good at helping students think of each term in the expression as a part of a whole, where the whole is the 1000 yen (see power point, slide 3).

The total cost of the   purchase was:

Students also review writing exponents in algebraic expressions.  This is a great time to discuss the different between 3x and x^3, a topic that has usually come up organically when I ask students to simplify expressions such as:

The last topic reviewed includes quotients and the use of the fraction bar to create groups. For example, (x + 3) ÷ 2 can be written as

This lesson provides a great opportunity to emphasize MP7 - looking for and making use of structure. Most struggling students are most confused by the idea that we can perform operations with numbers we do not know. The best way to get them to make the connection between the operations and the structure is through repeated, concrete example where there are no unknowns. For example:

"what if we didn't know this number? I would still be able to multiply by 6 because there are 6 of the same number being added. This works for all real numbers, thus, we can use the rule with variables"

Students take the last ten minutes of class to discuss their answers and ask questions to clarify. Some of the most commonly asked questions included: 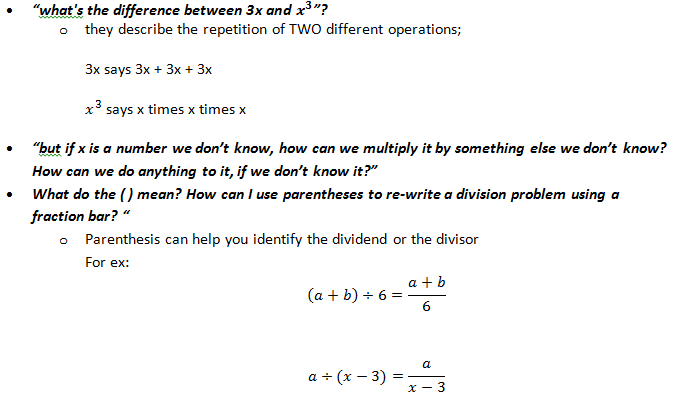