Grit, Common Core, and Working Together

Students will be able to engage in academic discussions (including: following rules for discussions, posing questions, and acknowledgment of new information) by giving and receiving homecourt advantage.

Students need emotional support from teachers, classmates, and themselves to effectively learn. Homecourt advantage gives them the framework to support each other throughout the year.
Lesson Author 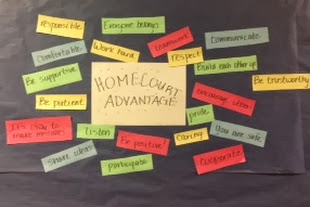 Today's activity was designed to develop the school culture.  Our sixth graders complete an intensive leadership unit at the beginning of their sixth grade year and the seventh and eighth grade teachers are expected to continue the development of leadership skills.

I posed the following questions to students.

After we reviewed the concept of homecourt advantage, I told students that we were going to practice giving and receiving homecourt advantage.  Each pod would work together to lift a stick (I used a ski pole that I borrowed from another teacher) filled with helium from arm level, down to the ground, and back up to arm level.  The stick is filled with helium, so it will want to float up to the ceiling, but if they keep the stick in the proper position and work together, it will work. The stick is not actually filled with helium, but the students think it is.

The proper position is to keep the stick between the first and second knuckles of the hand.  Hands need to be facing palm-down.  Everyone needs to be in contact with the stick at all times.  After modeling the process (without the fake helium) I asked students to discuss with their groups how they might complete this task.  I stepped out of the room for a few moments and pretended to fill the stick up with helium.

I asked for a brave group who would be willing to go first.  They came up, put their hands in the proper position, and I balanced the stick on their fingers.  As they tried to get it to the ground successfully, I watched carefully to see that everyone's fingers were on the stick.  If they weren't, I pretended like it was rising up and grabbed it before it got too far up.  If the stick was rising up, I grabbed it. Each group was given an opportunity to come up and try the task. The students in the audience were constantly reminded to give homecourt advvantage to the group up front.  They could show homecourt advantage by using the sign for applause as a group went up, staying quiet while the group was presenting, and so forth.  To make the point that cheering, yelling, etc. is not actually homecourt advantage in the classroom, I asked one or two students to do just that while one group was up front.  I asked the students how it felt.  They were distracted and couldn't complete the task.

After each group tried the task, I pointed out what made them successful. Communication, patience, concentration, hard work, and other such traits were what made the successful groups successful.

5 minutes
Motivating Students to Motivate Themselves

I told students that last year's students didn't even know how much more difficult it would be because this year we would be working with the common core standards.  I told them that the Arizona standards and the AIMS test (our state test) set the bar for passing really low. . . at 55%.  Students could actually miss half of the questions and still pass the test. They could get an F on the state test and still pass the test.  This was shocking news to them and their faces showed that they saw how serious that was.  I told them that the new test, PARCC, would expect much, much more of them.

Sometimes it's hard to find motivation to keep going.

Sometimes it's hard to keep going when you know that no matter how hard you work, you'll only get a D.  or a C.  or a B.

Sometimes it's hard to keep going when you think it'll never be enough.

And so I asked the students what motivates

I asked students to consider the motivation that each of the individuals above had.  And the answer that they gave me was simple.

The desire to improve.

See this video for a collection of thoughts about grit.